How Change Got Global: The Founding of Impact Hub 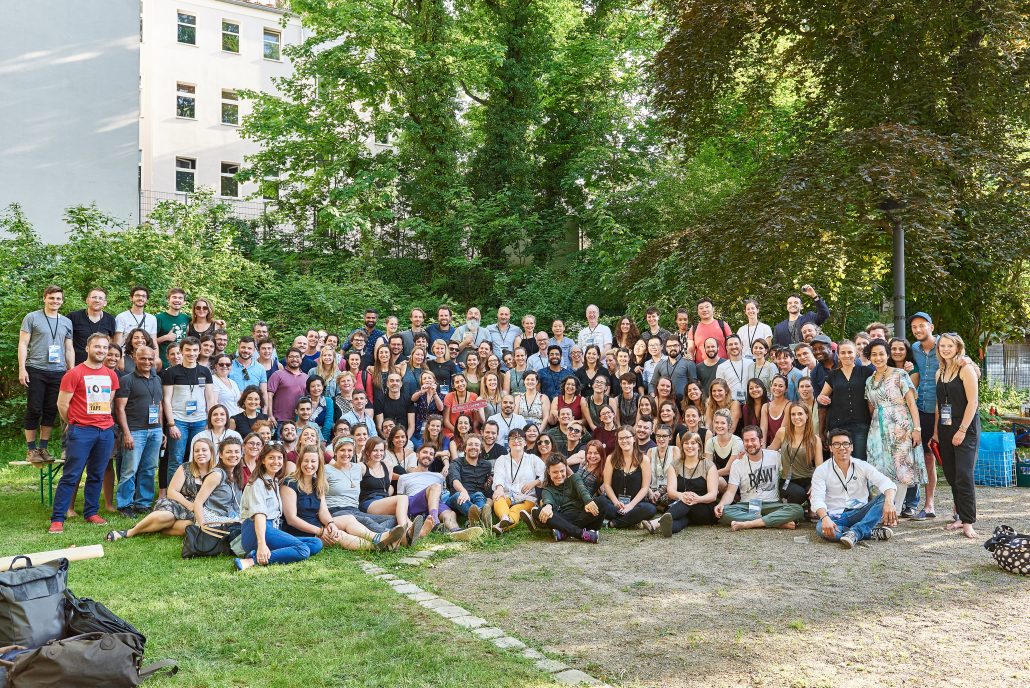 Now more than ever we are being called to tackle urgent social and environmental issues. At the same time, our governments and economies are facing significant disruption, but this isn’t really a series of problems, this as an opportunity for transformative system change.

We believe that the only way forward is by joining forces to build a future where business and profit work in support of people and planet. That’s why we created the world’s largest acceleration and collaboration platform for positive change — what is now known as the Impact Hub network.

How did it start?

In 2000, a young, idealistic group of graduates from Wales’ Atlantic College decided to test the boundaries of the status quo. Securing London’s Royal Festival Hall for a millenium event, they wanted to initiate debate on the connections between global environmental, social, and political issues, persuading Nobel Prize winners and influential thinkers to speak. Even the Dalai Lama was enlisted for a video address.

Their boldness saw them invited to host an NGO event for the 2002 United Nations World Summit on Sustainable Development in Johannesburg. But instead of accepting it, they chose to create a more meaningful alternative — a people’s summit. They joined forces with local activists in Soweto who were transforming a township wasteland into the Soweto Mountain of Hope, aka ‘SoMoHo’, an arts, environmental education, and community hub, which outshone the UN summit and touched heads of state, as well as UN Secretary-General Kofi Annan.

Back in the UK, they wondered how they could bring these perspectives into the world of work, and thereby help people consider more purposeful careers that tackle urgent world issues. Looking into it, it hit them: People were already trying to action impactful ideas from their kitchen tables, not reaching their potential in isolation. Their growing group of collaborators changed this in 2005, when they found a space to bring these isolated entrepreneurs and innovators together: a run-down London loft that would house the forerunner of Impact Hub.

The concept of ‘The Hub’ came to life, bringing changemakers together with the shared workspace, community, and events needed to advance their ideas and create new collaborations. Soon transformed with a community-designed interior using recycled and reused materials, The Hub met London impact makers’ needs for a collective action space and quickly filled up.

Months later, The Hub’s rapid growth made its hosts reach out to their networks, keen to discuss how to best support their expanding impact community. To their surprise, the resulting gathering in 2007 had little to do with member support but instead was full of people eager to find out how to open their own local Hubs all over the world.

An Impact Movement Is Born

So the team examined the principles of space co-creation and community building that were born in Soweto and tested in London, curious to see if Hubs might also work elsewhere… By 2008, there were nine Hubs on three continents.

The new spaces became rallying points for people passionate about building a radically better world, and the new Hub founders also connected — seeking inspiration in London and traveling to each other’s spaces to find out how to turn societal challenges into opportunities.

Dozens of would-be Hubs emerged following a centralized body in London, which envisioned the blooming network of Hubs developing as social franchises. But, by 2010, the founding teams came to a realization: Their future had to be a collective one.

This realization led to the creation of a bottom-up, democratic governance model. It came to life in late 2011, marking the Hubs’ transformation into a genuine collective: one with a co-leadership structure and shared practices to shape a new way of doing business together, in and for the world.

In 2013, the empowered network reinforced its focus on purpose-driven innovation and, with this, chose a more fitting name: Impact Hub. Over the next four years, Impact Hub expanded its global reach and more than doubled its community of entrepreneurs and innovators to over 16,000 members across the globe. Instilling conscious leadership around social and business innovation, Impact Hubs inspire, connect and enable positive change across diverse contexts and economies to prove that the future of business is found in profit that serves people and the planet.

In 2018, as a truly global network, it is now tackling its next challenge: Impact at scale.

You can also check out Impact Hub’s photo story in full.

Thursday, 20 September 2018 – From 22-29 September 2018, representatives from the Impact Hub global network will come together with Accelerate2030 in New York, USA, and with workshops, talks and Global Goals Jam events in Asia Pacific, Europe, Latin America and North America, to take part in Global Goals Week.

This  annual week of action, awareness, and accountability for the Sustainable Development Goals (SDGs) takes place alongside the UN General Assembly. Launched in 2016 by Project Everyone, UNDP, and the United Nations Foundation, Global Goals Week brings together governments, businesses, individuals, international organizations and civil society to build momentum to achieve the SDGs and ensure no one is left behind.

Impact Hub will participate by hosting events in New York, across the globe, and by publishing inspiring stories connected to the SDGs. As one of the world’s largest impact accelerators, Impact Hub uses the SDGs as a lens through which to view its impact on the world, and for more than 10 years has empowered locally rooted communities to progress towards them in North America, Latin America, Europe, Africa and Asia.

The network’s 2017 Community Impact Report for instance has revealed striking insights into how the SDGs are being addressed worldwide, reporting that SDG 4: Quality Education and 8: Decent Work and Economic Growth, are the topics that Impact Hub members are most devoted to overall.

Achieving the SDGs by the year 2030 is a huge challenge for today’s change-makers, but Impact Hub believes that this can be accomplished. Using Global Goals Week to showcase the incredible work that’s already being done by innovators in the network, the organization’s ambition during this week is to inspire others to join forces and do the same. 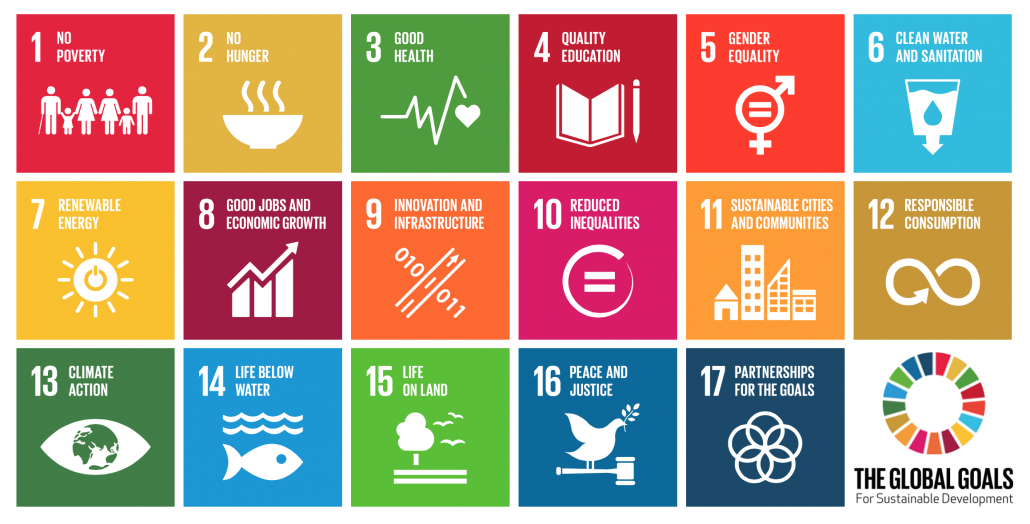 Accelerate2030 is a program designed to scale the impact of entrepreneurial solutions for the SDGs. One of Impact Hub’s 200+ acceleration programs, Accelerate2030 has positively impacted developing economies in 19 countries across Africa, Asia, Latin America and Eastern Europe.

Co-initiated by UNDP, ITC and Impact Hub Geneva – and with two editions of the program implemented so far –  the program has enabled 50+ national finalists and 15 global winnersto scale up their ventures towards the SDGs and has so far reached over 2 million people. Accelerate2030 supports the most innovative ventures with tailored support for scaling and developing sustainably, accessing investors, gaining strategic partnerships, and professional leadership coaching.

The 2017 international finalists have been invited to New York for a week-long boot camp, which includes investor meetings and an enterprise ecosystem tour, and will be speaking at the two events hosted by Accelerate2030. The bootcamp in New York will conclude the 12 month support Accelerate2030 has been offering to the international finalists. The next edition, co-created and newly improved by participating Impact Hubs, is already in the making with applications planned to open in early 2019.

During Global Goals Week, Accelerate2030 will come to New York to host the following events:

– A2030: Scaling the Impact of Entrepreneurial Solutions for the SDGs, exploring examples of collaboration between ‘Unlikely Allies’ for SDGs, including startup-corporate partnerships, and the need to focus on creating tangible impact through collaborative approaches. 27 September, 6-8pm, Scandinavia House, 58 Park Ave, New York.

On her visit Merkel will be accompanied by the German Federal Minister for Economic Cooperation and Development Gerd Müller, and a high-level business delegation consisting of representatives of German companies.

Apart from meeting the President of Ghana and attending a business roundtable the Chancellor wants to interact with young Ghanaian entrepreneurs. According to Merkel’s video podcast released on 26th August on YouTube, she wants to talk about the possibilities ‘opening up an economic perspective’.

Therefore, the German Embassy in collaboration with the Deutsche Gesellschaft für Internationale Zusammenarbeit (GIZ) GmbH, Delegation of German Industry & Commerce in Ghana (AHK Ghana) and Impact Hub Accra, a start-up incubator located in Osu, organizes a lounge discussion and mini fair during the visit which will also be attended by selected young Ghanaian founders; it will take place at the Impact Hub Accra.

Chancellor Merkel wants to discuss issues regarding Ghana as an investment destination. In her podcast she says, Africa and Europe are growing ever closer due to globalization and digitization. Therefore, the Ghanaian start-up entrepreneurs will have the opportunity to present their innovative and, in part, digital business ideas to the Chancellor and her business delegation at Impact Hub.

On Thursday evening, the Chancellor Angela Merkel will continue her Africa trip. After Senegal and Ghana, Nigeria is completing her visit.

Impact Hub’s Global Impact Report pulls together data and stories from around the world to illustrate the massive effect individual social entrepreneurs are having on the ground.

How does change actually happen at a global scale? According to Impact Hub’s Global Impact Report 2018 , it starts at the local level, with social entrepreneurs who are tackling the world’s biggest problems. Social entrepreneurs like Sidiki Sow of Protera Farms, who is developing edible insects as feed for livestock at Impact Hub Bamako in his native Mali. Or Corinna Grace, the co-founder of Seres based at Impact Hub Antigua, which helps young people in Guatemala get an education and develop their technical skills in order to not only get ahead, but also pass it on to their communities.

In addition to inspiring stories of entrepreneurs who are doing well while doing good, the report includes valuable insights from Impact Hub’s more than 10 years of building communities for impact around the world and five years of gathering data about it — insights that other organizations and groups can learn from on their own work with social enterprises. The report also features a section specifically on the support needs of social entrepreneurs, offering a detailed outline of exactly what these organizations need to grow and thrive, and inviting other people and organizations to contribute to scaling impact.

“It is possible to create impact at scale without losing local context through standardization by ensuring that local roots remain present at all levels,” Impact Hub Global Executive Director Gabriela Gandel says. “Moreover, you need a backbone organization that focuses on the curation of innovation, the hosting of connections, and catalytic opportunities for all. However, this does not have to be always centralised but rather collectively coordinated to allow for leadership from the network. And thirdly, it is essential to find common impact issues that bring together various network entities and external partners to make a bigger, bolder difference.”

However, Impact Hub isn’t just expecting that the Global Impact Report will inspire and guide other social entrepreneurs, networks, and organisations as they move forward. They are also applying the lessons outlined in the report across their 100+ locations strong network. Moving forward, Impact Hub will focus on mobilizing and connecting communities for global action; accelerating translocal collaboration on key issues of which many are related to the United Nations’ Sustainable Development Goals; and shaping the support infrastructure to prototype the future of business and society.

But in order to achieve these big goals and drive solutions to some of the world’s most pressing issues, it takes strong collaborations across players and sectors, which is why the report strongly calls for partners to create impact at scale.

People and organizations interested in collaborating with the Impact Hub community can learn more in specific sections of the Global Impact Report or visit the nearest local Impact Hub .

Impact Hub is a global network focused on building communities for impact at scale. With 100+ communities of 16,000+ change-driven entrepreneurs in more than 50 countries across five continents, Impact Hub is the world’s largest community and accelerator for positive change.