Whether you’re flying solo, a tiny team, or a growing startup, you don’t have to take on the world alone. Join us at any of the following events and meet an inspired community of people who are passionate about working together to build a better Houston for all!

Taking Your Startup from Series A to Exit with S3 Ventures 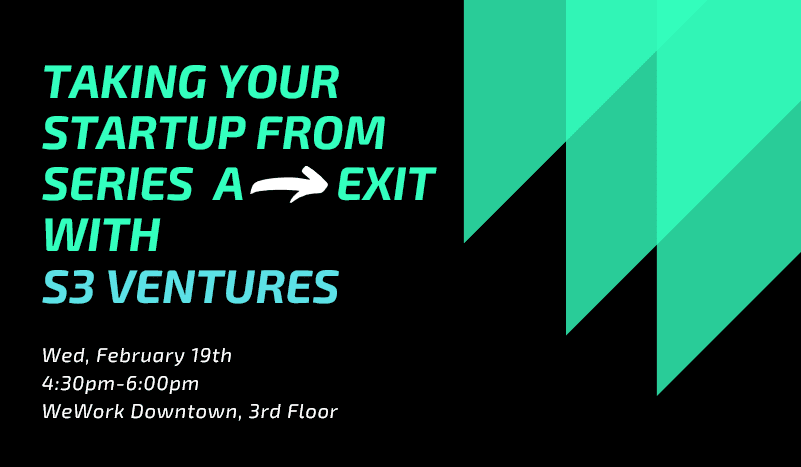 Austin based firm, S3 Ventures, will give a presentation on taking your startup from Series A to Exit followed by Q&A and networking.

Austin based firm, S3 Ventures, will be in Houston! Join Vice President of S3 Ventures, Aaron Perman, at WeWork Downtown on February 19th at 4:30pm. Aaron will be presenting on how to take your startup from series A to exit followed by Q&A and networking. Light snacks will be provided! Hope to see you there!

S3 Ventures, the largest venture capital firm focused on Texas, recently co-led an $8M Series A round in Houston-based BrainCheck. Backed by a philanthropic, multi-billion-dollar family for over a decade, S3 empowers great entrepreneurs with the patient capital and true resources required to grow extraordinary, high-impact companies in Business Technology, Healthcare Technology, and Consumer Digital Experiences. With more than half-a-billion dollars in assets under management, S3 leads Seed, Series A, and Series B investments with the capacity to follow-on for the life of the company.Take a look at their portfolio companies here.

Aaron Perman joined S3 Ventures in 2013 and is currently a Vice President. He works closely with Chrono.gg, Datical, LevelSet, Liveoak Technologies, and Pivot3, and previously served on the board of Invodo (acquired by CoCreativ).

Prior to joining S3, Aaron invested in small-cap publicly traded companies at Western Standard, a long/short equity hedge fund. Earlier in his career, Aaron spent time in the corporate strategy group at Southern California Edison and started a successful small business liquidating computer hardware. Aaron serves as a mentor for the DivInc Accelerator and leads the Emerging Venture Capitalist Association’s Austin chapter. He received his BS in International Business from the University of Southern California.

SUBMIT YOUR EVENT FOR OUR CALENDAR!